VANCOUVER, BC, Jan. 12, 2023 /CNW/ - MANTARO PRECIOUS METALS CORP. (TSXV: MNTR) (OTCQB: MSLVF) (FSE: 9TZ) ("Mantaro" or the "Company") is pleased to report complete results from the 21 diamond core holes drilled by the Company in 2022 at the Golden Hill property in Bolivia ("Golden Hill"). Significant intercepts from the drill program are summarized in Table 1 below, including newly reported intercepts.

"These results are overall tremendously encouraging for Mantaro's first pass drilling program at Golden Hill. The Company's next phase of activities in relation to Golden Hill will include working to understand the controls on the high-grade zones within the mineralization, as well as some preliminary modelling with a view to targeting a maiden gold resource estimate in due course.

We are in the process of determining Mantaro's priorities for the coming months, and expect to provide shareholders with a further update soon. I look forward to an exciting year ahead with Mantaro."

Additional drilling is required to determine true widths as all holes intercepted veins at an oblique angle. The assays are not capped.

Broad gold mineralization was intercepted across the 'GC' structure in the northern most and southern most holes at the Gabby prospect (holes GH0018 and GH0019 respectively).

Holes GH0015, GH0016 and GH0017 were drilled to test the down dip extensions of quartz shear zones mapped at surface across the central Gabby area. These structures were intercepted at depth in all holes, however gold grades were of low tenor with no significant gold values intercepted. The Company has taken thin section samples of these barren quartz shear zones to better understand the gold deportment within the Gabby system, which will assist in guiding future drilling. 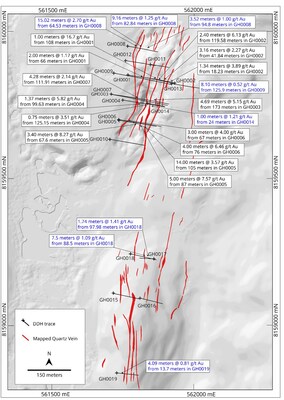 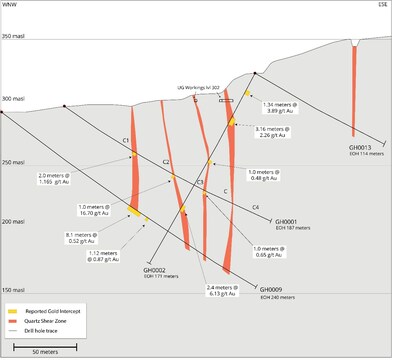 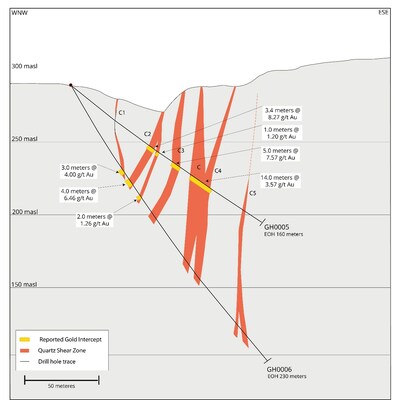 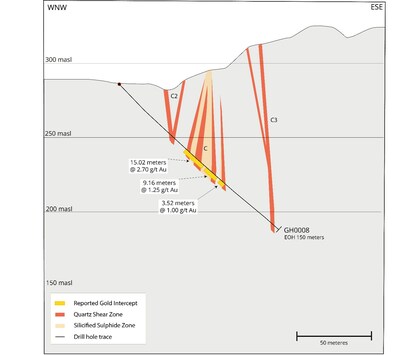 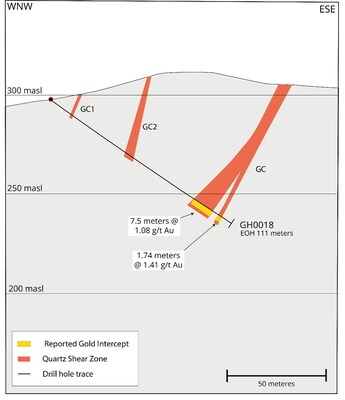 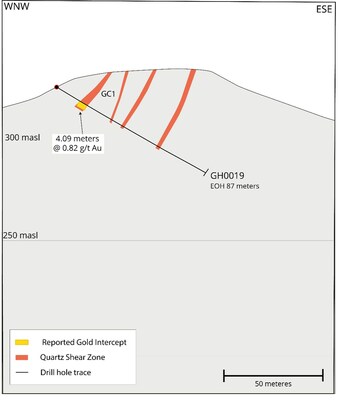 About the Golden Hill Property

Golden Hill is centered on a broadly north-south trending regional structure that hosts the La Escarcha underground mine and the Gabby, Garrapatillia and Brownfields workings and gold-bearing vein occurrences in its western hanging wall. The same structure hosts numerous saprolite gold and hard rock gold deposits to the north and south of Golden Hill over a strike length of at least 25 kilometers - underpinning the significant control the structure exerts on gold mineralization.

A northwest-trending splay of this structure hosts areas of alluvial and saprolitic/hard rock workings within Golden Hill and immediately to the north. At least six strike kilometers of these structures are known within Golden Hill in addition to the four kilometers between La Escarcha and Brownfields which have been mapped in detail. Known mineralization and surface anomalism is open along strike on all structures.

Veins are well exposed in underground workings at La Escarcha where they comprise multiphase white quartz and slivers of wall rock which are fracture oxidized. Veins are up to 5 meters wide and contain significant visible gold. Most gold appears to be free hosted in fractures within quartz and pyrite.

Mantaro follows industry-recognized standards of best practice and quality assurance/quality control. Samples were submitted for laboratory analysis in batches of 40 - comprising 35 half cut core samples, two field blanks, two certified reference material standards and one staged duplicate. Samples were sealed in plastic bags using single use tie-locks and delivered to ALS Oruro in Bolivia - thereby ensuring chain of custody. Since the ALS facility in Bolivia is only a preparation facility, sample pulps were sent to ALS Ireland for fire assay. To date, all batches have passed QAQC and blanks and CRMs were within acceptable tolerance limits. All diamond holes were started in PQ diameter, occasionally downsizing to HQ in difficult drilling conditions past 150 meters. Core recovery across all veins was nearly 100%.

Mantaro Precious Metals Corp. is a British Columbia company that holds a diversified portfolio of gold and silver focused mineral properties in Bolivia and Peru. The Company holds an option to acquire up to an 80% interest in the advanced Golden Hill orogenic gold property ("Golden Hill"), located in the underexplored Precambrian Shield, Bolivia.

Information set forth in this news release contains forward-looking statements that are based on assumptions as of the date of this news release. These statements reflect management's current estimates, beliefs, intentions and expectations. They are not guarantees of future performance. The Company cautions that all forward looking statements are inherently uncertain and that actual performance may be affected by a number of material factors, many of which are beyond the Company's control. Such factors include, among other things: risks and uncertainties relating to Company's limited operating history and the need to comply with environmental and governmental regulations. Accordingly, actual and future events, conditions and results may differ materially from the estimates, beliefs, intentions and expectations expressed or implied in the forward-looking information. Except as required under applicable securities legislation, the Company undertakes no obligation to publicly update or revise forward-looking information. 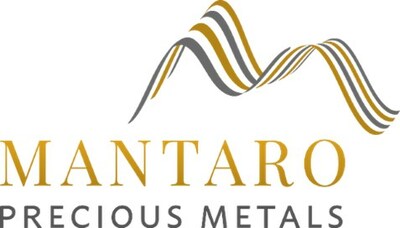