VANCOUVER, BC, April 6, 2022 /CNW/ -  MANTARO PRECIOUS METALS CORP. (TSXV: MNTR) (OTCQB: MSLVF) (FSE: 9TZ) (the "Company") is pleased to announce that it has entered into a drill contract with Leduc Drilling S.R.L. ("Leduc Drilling") to carry out an initial 5,000m diamond drilling program at the La Escarcha, Gabby and Brownfields targets of Golden Hill Property, Bolivia.

Craig Hairfield, Chief Executive Officer of the Company, commented, "Our exploration work to date at Golden Hill has allowed us to better define the high priority drill targets and understand grade continuity within the vein system.  Greenstone hosted gold systems, such as Golden Hill, are very attractive exploration targets as deposits typically occur in clusters along regional structures over strike lengths of several kilometers and depths of >1 kilometer. Drilling will initially test the depth extension of La Escarcha, centered around historic workings and recent Mantaro exploratory work, followed by testing of other high priority targets that have been delineated in our recent surface programs."

Golden Hill is centered on a broadly north-south trending regional structure (see Figure 1) that hosts the La Escarcha underground mine and the Gabby, Garrapatillia and Brownfields workings and gold-bearing veins in its western hanging wall. The same structure hosts numerous saprolite gold and hard rock gold deposits to the north and south of Golden Hill over a strike length of at least 25 kilometers — underpinning the significant control the structure exerts on gold mineralization.

Second order faults splays host areas of alluvial and saprolitic/hard rock workings to the north of La Escharcha — where Mantaro Geologists are currently rock-chip sampling and mapping. At least six strike kilometers of these structures are known within Golden Hill — in addition to the four kilometers between La Escarcha and Brownfields which have been mapped in detail. Known mineralization and surface anomalism is open along strike on all structures. 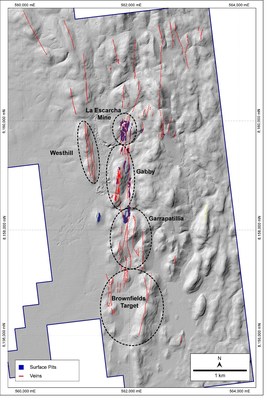 Mineralization between La Escarcha and Brownfields is characterized by a series of broadly parallel, north-south trending, very steeply dipping quartz veins that are between 1 to 5 meters wide. Mineralization is hosted in mafic metavolcanics, at the contact of metavolcanics and metasediments, and within metasediments (see Figure 1).

Veins are well exposed in underground workings at La Escarcha where they comprise multiphase white quartz and slivers of wall rock which are fracture oxidized. Veins are up to 5 meters wide and contain significant visible gold. Mine staff have reported that gold grades increase downwards from surface to the 60 m level which is currently under limited development. Most gold appears to be free hosted in fractures within quartz and pyrite.

Mantaro Precious Metals Corp. is a British Columbia company that holds a diversified portfolio of gold and silver focused mineral properties in Bolivia and Peru.  The Company's holds an option to acquire up to an 80% interest in the advanced Golden Hill Property ("Golden Hill"), located in the underexplored, orogenic Bolivia Shield, Bolivia.