Mantaro Silver Corp. to Acquire up to an 80% interest in Fully Permitted Golden Hill Property, Bolivia

Vancouver, British Columbia, August 25, 2021 – MANTARO SILVER CORP. (TSXV: MSLV; FSE: 9TZ) (the “Company”) is pleased to announce that it has entered into a property option agreement (the “Option Agreement”) with Minera Golden Hill S.R.L. (“MGH”) and Luis Fernando Kinn Cortez (the “Optionor”) to acquire up to an 80% interest in the advanced Golden Hill Property (“Golden Hill”), located in the underexplored, orogenic Bolivian Shied, Bolivia. The Golden Hill Property comprises of one concession totaling 4,468 hectares and offers direct access through the historic mining town of San Ramon.

Dr. Chris Wilson, Chairman and Chief Executive Officer of Mantaro states, “Golden Hill is an advanced stage gold-focused project with significant exploration upside.  A drill ready orogenic gold project in Bolivia is an excellent complement to our existing high-grade silver assets in Peru. Greenstone hosted gold systems, such as Golden Hill, are very attractive exploration targets. Not only is it common for major deposits to occur in clusters, but individual deposits are defined by multiple high-grade shoots over a strike length of 1 to >2 kilometers and depths of >1 kilometer.”

Figure 1:  Map of Historical Workings at the Golden Hill Property 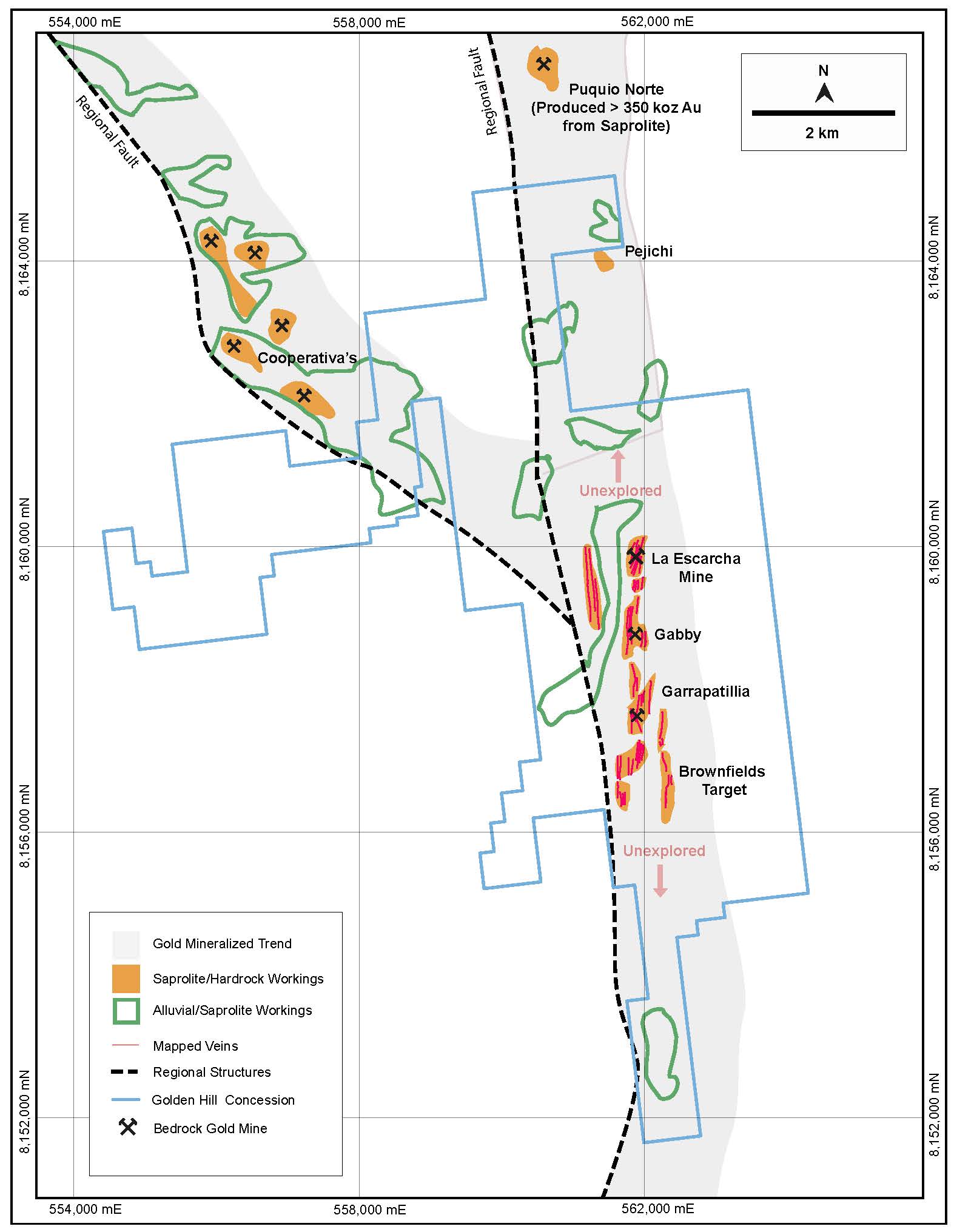 The Golden Hill Property is owned by a private Bolivian Company and is fully permitted for mining and drilling. Prior to the option agreement with Mantaro, one of the main quartz veins at La Escarcha was being mined at a rate of up to 25 tonnes per day to a depth of 60 meters.  The mined material was processed at site and gold recovered using a combination of simple gravity circuits. The mine permit at Golden Hill allows for production to be increased subject to the Company completing its own economic studies on the project and to sufficiently fund any upgrades.

Dr. Wilson further comments, “the style of mineralization at Golden Hill, and its regional structural setting, makes for an extremely robust exploration target. The fact that Golden Hill is permitted for mining and mine expansion, and immediate drilling, underpins the value of Golden Hill as an advanced exploration property.”

Mantaro’s acquisition strategy, which was utilized in Peru, is to pursue high-grade deposits that have potential at depth.  Golden Hill is a high-grade gold mineralized system of a style that hosts some of the world’s major gold mines.  It has been exploited in a small scale manner to 60 vertical meters with increasing gold grade at depth over widths of 1 to 5 meters. The underground dataset significantly de-risks the near surface exploration potential and drill targeting.

The Golden Hill concession is centered on a broadly north-south trending regional structure (see Figure 1) that hosts the La Escarcha underground mine and Gabby, the Garrapatillia and Brownfields workings and gold-bearing vein occurrences in its western hanging wall. The same structure hosts numerous saprolite gold and hard rock gold deposits to the north and south of the Golden Hill concession over a strike length of at least 25 kilometers — underpinning the significant control the structure exerts on gold mineralization.

A northwest-trending splay of this structure hosts areas of alluvial and saprolitic/hard rock workings within the Golden Hill concession and immediately to the north. At least six strike kilometers of these structures are known within the concession — in addition to the four kilometers between La Escarcha and Brownfield which have been mapped in detail. Known mineralization and surface anomalism is open along strike on all structures.

Mineralization between La Escarcha and Brownfields is characterized by a series of broadly parallel, north-south trending, very steeply dipping quartz veins that are between 1 to 5 meters wide. Mineralization is hosted in mafic metavolcanics, at the contact of metavolcanics and metasediments, and within metasediments (see Figure 2). 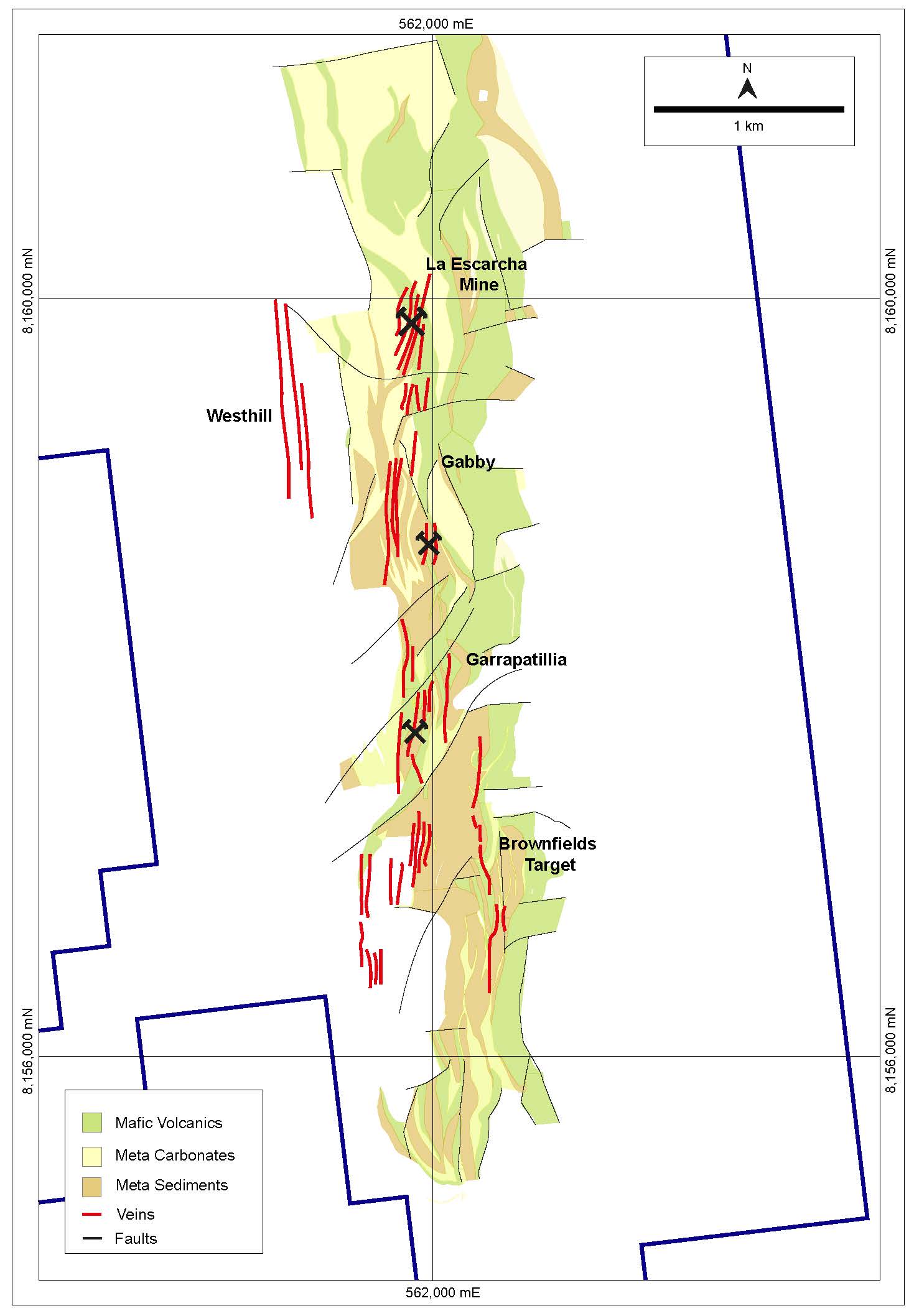 Veins are well exposed in underground workings at La Escarcha where they comprise multiphase white quartz and slivers of wall rock (see Figure 3) which are fracture oxidized. Veins are up to 5 meters wide and contain significant visible gold (see Figure 4).

Mine staff have reported that gold grades increase downwards from surface to the -60 m level which is currently under limited development. Most gold appears to be free hosted in fractures within quartz and pyrite.

Figure 4: Presence of Visible Gold on Rock Chip Sample at the Golden Hill Property. The long axis of the photograph is approximately 5 cm.

As with other greenstone belts and mineralized provinces worldwide, mineralization in the Bolivian shield is hosted along major crustal structures which juxtapose different lithologies against each other (resulting in competency contracts across the structure). Regional-scale structures serves to focus mineralizing fluids, whilst rocks of different competency, provide a regime for both ductile and brittle deformation and thus creation of space for deposition of quartz, pyrite and gold. Mafic volcanics are especially favorable hosts due to the high iron content which reacts with sulphur in mineralizing fluids to form pyrite — causing gold to precipitate from the mineralizing fluids. Golden Hill is located on a crustal scale structure which hosts at least six other significant gold occurrences and deposits (see Figure 5), at the juxtaposition of several different lithologies, including meta-volcanics with abundant iron-rich ferromagnesian minerals. From a regional perspective and comparison with other greenstone belts worldwide, Golden Hill is an attractive project.

Figure 5:  The Bolivian Shield and Location of Golden Hill Property 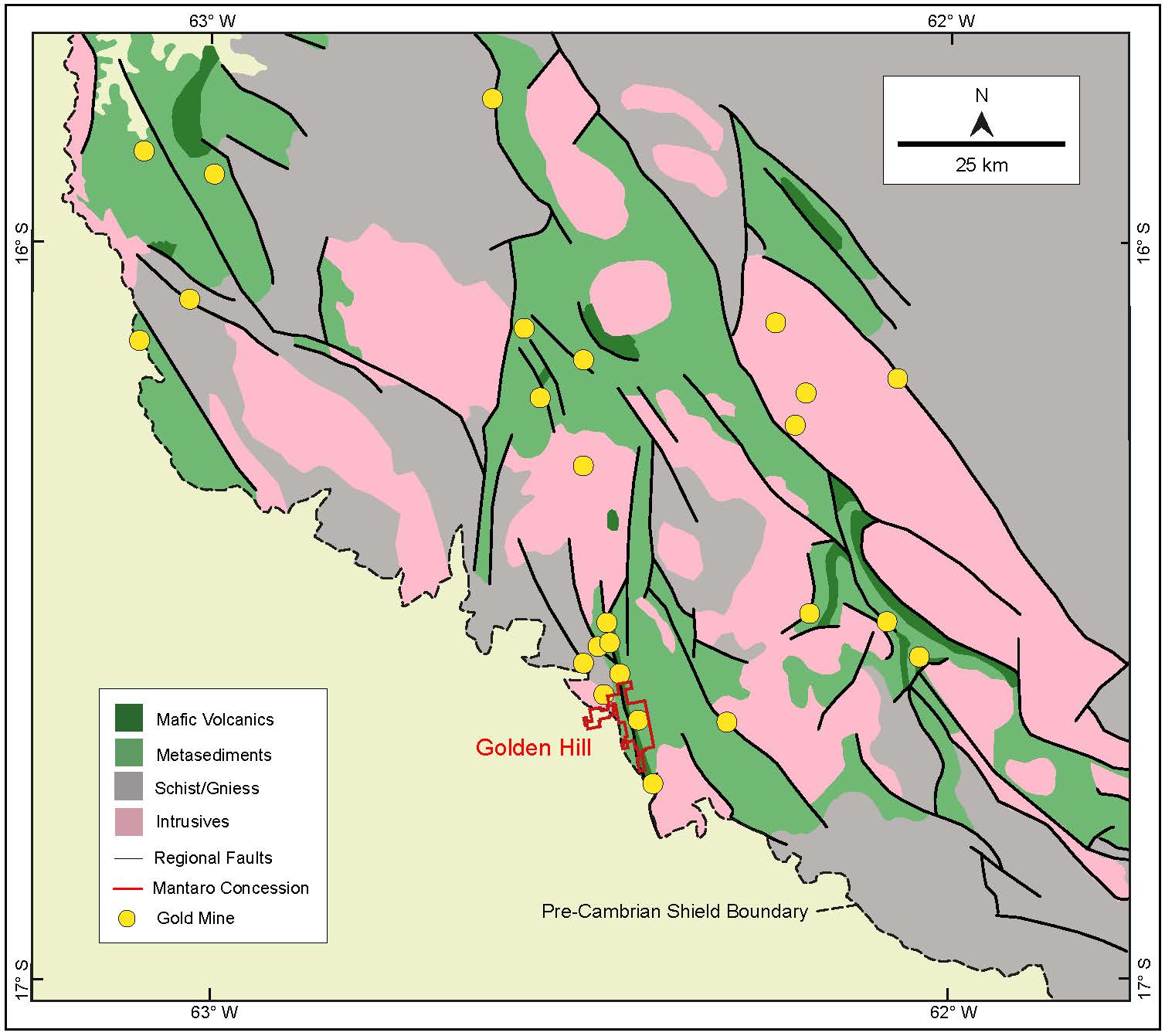 La Escarcha, Gaby and Brownfield are drill ready targets.  Ahead of drilling, Mantaro is planning to channel sample all underground levels at la Escarcha, in addition to the 200 kilogram bulk sample that has already been taken for bench-scale metallurgical testing at SGS Lakefield.  This initial program will assist Mantaro in fine tuning drill targeting.  Mantaro also has the option of continuing development and exploration from the existing underground workings.

A concession-wide mapping and rock-chip grab sampling program is planned for early September in order to focus regional soil and trench sampling programs. Alluvial and saprolite workings are much more extensive than known hard-rock targets and underground workings, which suggests that gold mineralization along regional structures is more extensive than currently known. Defining the source of this alluvial and saprolitic gold will be an important focus of Mantaro’s field work.

Under the terms of the Option Agreement, the Company may acquire up to an 80% interest in the Golden Hill Property by making the following cash payments, share issuances and incurring the following exploration expenditures.

In the event that the Company exercises the First Option or Second Option but fails to exercise the Third Option, the Company’s interest will be reverted to a 2% Net Smelter Return Royalty, which may be repurchased at a price of US $1,000,000.

If the Company acquires an 80% interest in the Golden Hill Property, the Company will grant a 2% Net Smelter Return Royalty to the Optionor, which may be repurchased at a price of US $1,000,000.

The Option Agreement is subject to acceptance of the TSX Venture Exchange.

The technical content of this news release has been reviewed, verified and approved by Dr. Chris Wilson,  B.Sc (Hons), PhD, FAusIMM (CP), FSEG. Chief Executive Officer and Director of Mantaro, a qualified person as defined by NI 43-101.

For more information please contact:
Leo Karabelas
Phone: (647) 689-6041
E-mail: This email address is being protected from spambots. You need JavaScript enabled to view it.

Information set forth in this news release contains forward-looking statements that are based on assumptions as of the date of this news release. These statements reflect management’s current estimates, beliefs, intentions and expectations. They are not guarantees of future performance. The Company cautions that all forward looking statements are inherently uncertain and that actual performance may be affected by a number of material factors, many of which are beyond the Company’s control. Such factors include, among other things: risks and uncertainties relating to Company’s limited operating history and the need to comply with environmental and governmental regulations. Accordingly, actual and future events, conditions and results may differ materially from the estimates, beliefs, intentions and expectations expressed or implied in the forward looking information. Except as required under applicable securities legislation, the Resulting Issuer undertakes no obligation to publicly update or revise forward-looking information.